View Guides
Everybody’s favourite place to escape, the sandy, car-free isle of Rottnest, has been winning the hearts of visitors for more than a century. Take a short boat trip across the turquoise waters and pick up your hire bike to explore the island at your own pace.

Known to the local Noongar people as Wadjemup, Rottnest is believed to have separated from the mainland about 7000 years ago, and now lies a tantalising 19km off the Perth coastline – just a short ferry ride away.

The coral reefs surrounding Rottnest are fed by the warm Leeuwin current, meaning the waters are populated by a teeming array of colourful marine life – boasting a diversity second only to that found in Shark Bay in the state’s far north.

Rottnest’s popularity is as enormous as the island is small, yet you can always find a secluded stretch of white sand. There are 63 beaches and 20 bays crammed into an area just 11km long and 4.5km at its widest point. Most people are drawn to the sheltered swimming holes near Thomson Bay, where the ferries arrive and depart, or Geordie Bay, a secondary hub 2km away.

But there are more treasures to be found by those who are willing to pedal their bikes a little further afield – from historical monuments, inland salt lakes and secret fishing spots, to mysterious diving wrecks and coral playgrounds.

Visitors are guaranteed to fall in love with the island’s famous and friendly quokkas. They inspired the name ‘Rottnest’, which translates to ‘rat’s nest’ in Dutch.

Rottnest is a place where families and friends can stay in neighbouring cabins and share barbecues on the verandah after long days of swimming and snorkelling in the sun. Book self-catered accommodation through the Rottnest Island Authority, from modern units to north-facing heritage cottages at Geordie Bay, or a 50-bed hostel and a camping ground near The Basin. Serviced rooms are available at the Rottnest Hotel. Rottnest Lodge offers a pool, bars and a variety of comfy rooms.

If you are travelling light with a party of five or six, arrive by air taxi, charter plane, private boat or helicopter. Otherwise, take a ferry from Perth, Hillarys Boat Harbour or Fremantle. 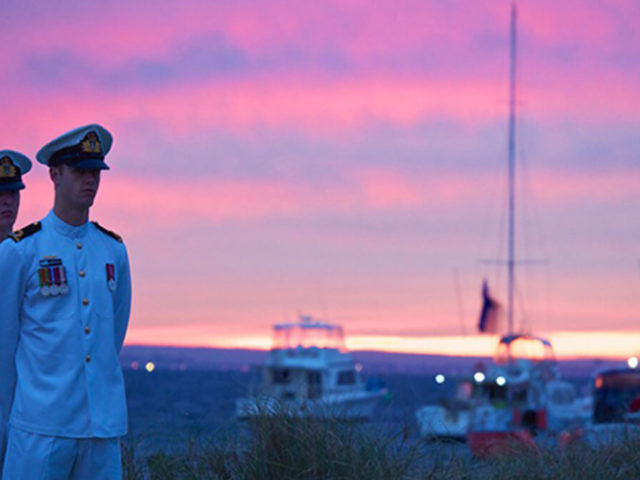 Exploring Rottnest Island’s dramatic history as a military base Where to go for a delicious family dinner on Rottnest 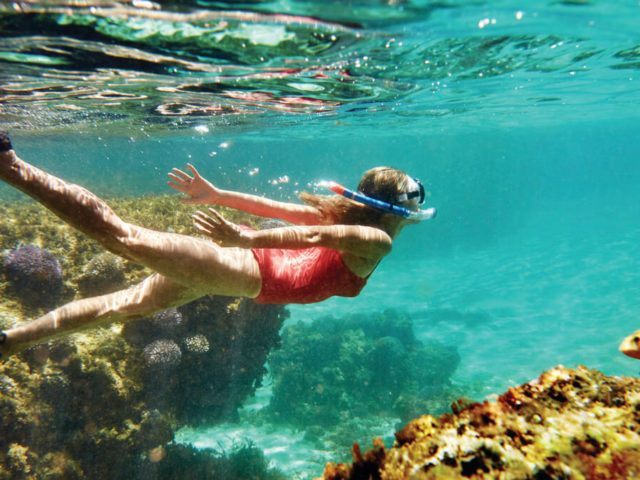 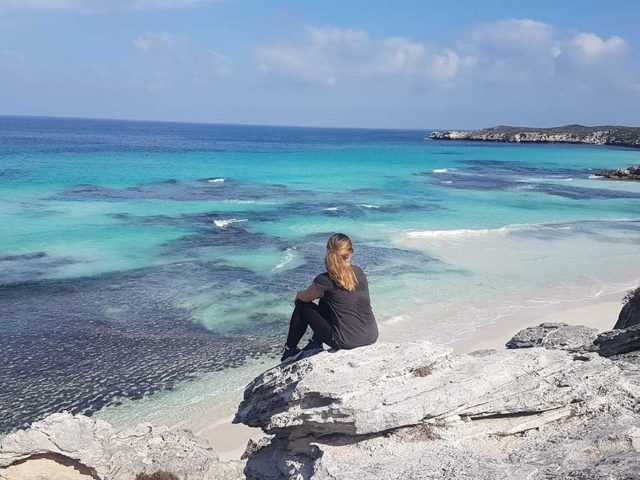 4 ways to make the most of Rottnest Island year-round 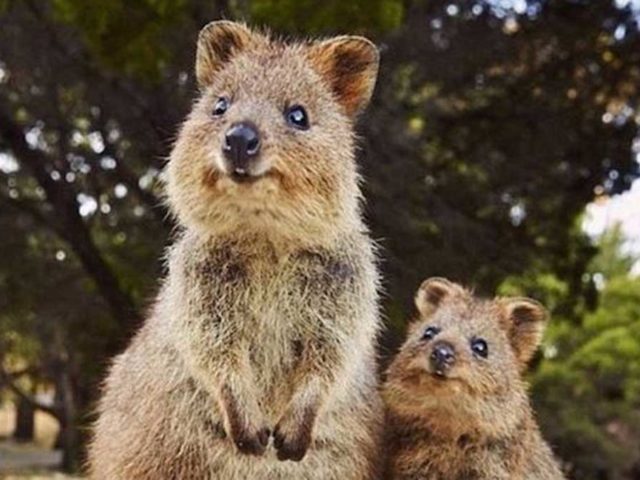 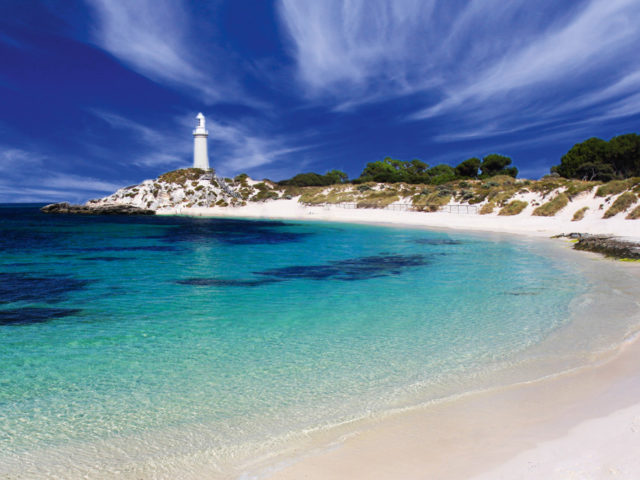 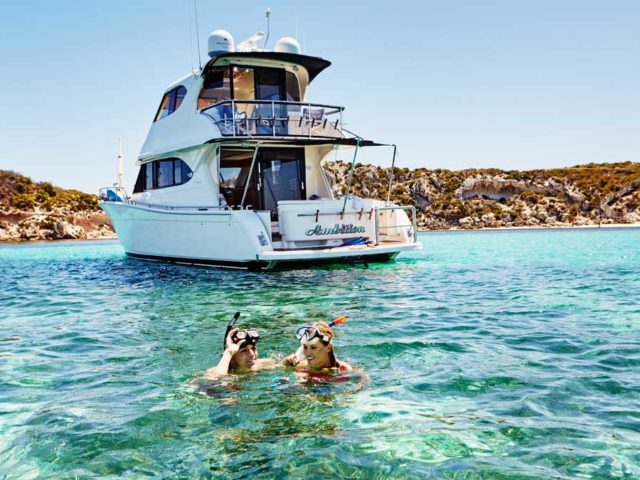 Things to do in Rottnest

Exploring Rottnest Island’s dramatic history as a military base

Where to go for a delicious family dinner on Rottnest

4 ways to make the most of Rottnest Island year-round

Things to do in Rottnest The Bathurst Lighthouse forms the subsiduary light to the Main Rottnest Island Light enabling vessels entering and leaving the Port of Fremantle to safely navigate the reefs around the island.

The Bathurst Lighthouse was built as a result of shipwrecks culminating in the "City of York" disaster in 1899. Built from local limestone in 1900, the tower is painted white with a gold lantern dome.

The lighthouse was one of four erected between 1910 and 1912 leading up to the Commonwealth takeover of coastal lights in 1915. In 1986 the light was converted to electric operation. The keepers cottage was sold to the Rottnest Island Board and is at present occupied by Board employees.

A remnant of Rottnest Island's World War II captivating military history, the battery was once used as a gun station.

Bickley Battery is located just by Bickley Bay and was used to hold 6inch guns during the Second World War. The gun is now on display at Kingstown Barracks but the Battery remains as a sign of the Island's involvement as a military base during the War. Experience the best of Rottnest on this sailing adventure via a luxury sailing catamaran.

Our team of expert and passionate crew live and breathe these waters – there’s nothing we enjoy more than sharing our little slice of paradise with you.


Come with us as we sail on our luxury catamaran fitted full of snorkel gear and a bunch of toys to play around in. Explore the beauty and tranquillity of Rottnest as you relax in the comfort of an air conditioned coach.

This 90 minute circumnavigation of the island takes you out to some of Rottnest’s most spectacular locations and provides you with a complete interpretation of the island through passionate and knowledgeable crew. This tour provides insight into Rottnest’s cultural and historical heritage, diverse wildlife and fauna and social heritage.  You will also have a chance to step outside and have a stroll along the boardwalk at the majestic look-out point at West End.

Situated on the south east side of the Island this ‘hidden’ dive site is spectacular.

Positioned approximately 850m South west of Dyer Island, ‘Crystals’ has a depth range of 8-18m.Entering the water, which is generally quite calm due to the position of the site, the first thing you will notice is the sheer amount of caves and swim through’s that you can see just from the surface. Looking down you will know straight away that 1 tank is not going to be enough!

As you descend into this array of caves you will see many fish of all species scarper into different directions to make way for you. This is the site where you are most likely to see just about every species of fish you are likely to encounter around Rottnest in the 1 dive! From the colourful Harlequin fish to the breathtaking big Blue Gropers, that can push you backwards just from the power of a tail kick in the opposite direction. Stay there a while though because he is sure to return curiously to see his new ‘Scuba friend’.

Once you have had a good look around over the top of the reef, begin to explore the subterranean caves for more exciting encounters! On this dive expect to see large Samson fish, the occasional Dhufish, Western Blue Devils, Buffalo Bream, Morwongs, Box fish, Leather-jackets and of course Crayfish! The topography of Crystal Palace is just brilliant with constant caves, holes and swim through’s; this is a dive that you will not get bored with. The site covers around 6-800m of awesome reef, which will excite even the most experienced diver.

Almost directly linked to Crystal Palace, towards the Island, directly out of Porpoise Bay, Porpoise Bay Caves make for an exciting second dive after the ‘Palace'.

There are brilliant photographic opportunities here with divers quite regularly seeing Sea Turtles, Leafy Sea Dragons and Fire fish (a species of Lionfish). This dive is simply a sit back and watch the world go by, or explore the caves until your heart is content type of dive. No cave here is the same.

Crayfish hunters be sure to take your loop with you, the Crayfish are big out here!

The best way to dive Porpoise bay caves is to start on the southern end of the reef and work your way toward the island. Be sure to get a good compass bearing, as many caves look alike from the surface and the currents here are a little stronger than Crystal Palace.

The dive is such an exciting array of caves that you will very easily lose track of where you are and that could lead to a long swim back to the boat if you are not careful. This dive site has a maximum depth of around 18m and runs up to about 8m. Choose this site when winds are light to non-existent as this site does ‘chop up’ fairly quickly on a stiff breeze, which can make the dive a little uncomfortable.

Marine life you can expect to see here are similar to Crystal Palace and you can be sure to see something new every time you dive here.

So called because of the “footprint” visible on the surface of the water after a swell has passed through.

The reef is virtually formed like a crater with a hollow in the center and many swim through’s accessible from the inside, especially the northwest and southeast sections of the reef. The most awesome swim through is accessible only from the outside and is again on the northwest side, with a huge cavernous opening at seabed level.

Diving at the Macedon and Denton Holmes Wrecks

The resting ground of not one but two shipwrecks - perfect for underwater exploration.

The Macedon was built in Liverpool in 1870 and was carrying 50 horses along with its cargo and passengers before it hit rock and sunk in 1883. A few years later in 1890, cargo vessel Denton Holmes joined it at the bottom of the sea after striking the reef off Rottnest Island's coastline.

Located virtually on top of each other, these wrecks lie on top of Kingston Reef just out from Thompson’s Bay. They have been prone to a lot of swell and surge, so apart from timber and iron remnants there is not a lot left. Watch out when you anchor near here and do NOT tie up to the big yellow mooring, as the local glass bottom boat cruises in here to show people the wreck.

Diving at the Wreck Of The Shark

Lying in the shallow water near the beach at Henrietta Rocks, the shipwreck provides an exciting environment for adventurous snorkellers.

The Shark met its end when it crashed into the reef around Rottnest Island, and now sits 50m off from the shoreline. Visible from the lookout over Henrietta Rocks, the wreck is home to a crew of fishy folk. Challenge your friends or family to a round of mini golf. Jump on the trampolines and play our prize redemption arcade games.

Open every day with classic pin-ball machines available to entertain children of all ages. In keeping with our ‘nostalgic’ theme we have pinball machines, Pac-man, Space Invaders and even Air Hockey. The latest addition to our games is ‘Giant Chess’ so come down and book a game for the whole family. This all-inclusive Island tour includes all of Rottnest’s must see locations.

Including the Wadjemup Lighthouse, Henrietta Rocks, Oliver Hill Gun Fortification and Tunnels and the majestic look-out point at the rugged Cathedral Rocks and Cape Vlamingh.  All major habitats are covered on this amazing tour, including Rottnest Island's cultural and historical heritage ranging from Maritime, Colonial and Military history to future developments. An inflatable water park floating on the water of Rottnest's Thomson Bay.

If you love outdoor fun and water then you’re going to love Just 4 Fun Aqua Park! This floating water park has a range of family activities and inflatable equipment suitable for All AGES, kids, youth, adults and even has a Knee Deep zone for little kids and toddlers. So whether it’s family fun, a birthday party, corporate team building, a school or sport group, splash, jump and slide into Just 4 Fun! Located on the Heritage Common, this historic cottage contains a photographic record of the daily lives of early settlers on the Island.

Lomas Cottage was built for ex-convict John Lomas. It underwent renovation in the late 1990s and is frequently used as an exhibition space to display the Angelo Collection, photographs capturing the lives of early settlers and Aboriginal prisoners on Rottnest Island.

In the heart of the Island, the battery at Oliver Hill stands as a testament to Rottnest's past as a military base during the Second World War.

Oliver Hill is located close to the centre of Rottnest Island and features a military remnants from World War II including a 9.2 inch gun and maze of underground tunnels. Enjoy a train ride from the Settlement Railway Station to Oliver Hill on the Island’s 64-seat Captain Hussey train, where you can admire the beauty of the Island’s south-side.

The train departs daily from the Settlement Railway at 12:30pm, 1.30pm and 2:30pm(train ride only). Boarding closes 10 minutes prior.

You can purchase your tickets online.

Alternatively, you can buy tickets on the Island at either the Rottnest Island Visitor Centre or automatic Kiosk located at the main bus stop. Make sure you book in advance to secure your spot!